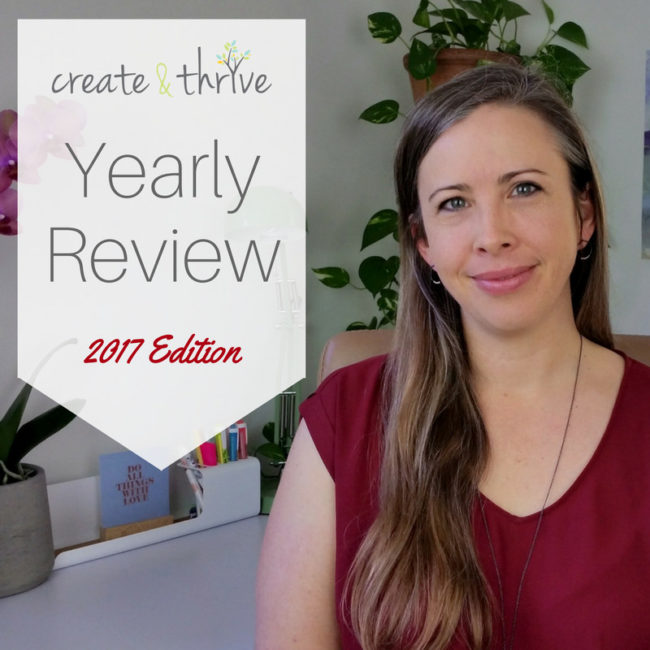 Since I’ve been sharing the #LookBackMoveForward process and course with you this week, I decided to also share some of my own review findings from the year just gone.

I decided at the beginning of 2017 that this would be a ‘consolidation’ year – my year of not starting anything new.

Pretty much every year since I started business – back in 2008 – I’ve started a major new project (or multiple new projects!).

This year, I wanted to solidify what I had done, and take a bit of a break from creating anything new. This was our first full year in our new home, and I’ve been loving just enjoying my home and family.

Funnily enough – alongside this, I inadvertently did the same in my personal life. I usually have at least one personal ‘project’ going at any one time, but this year, I haven’t – I’ve just been enjoying what I already have in my life.

Taking the pressure off has allowed me to have more space in my life – more time to relax and enjoy the lifestyle that my businesses allow me to have.

Now, as the year draws to a close, I’m feeling a new surge of energy, and I’ve got tons of ideas of where I want to take my work into the new year and beyond.

We saw sales slow down a little in the jewellery business this year, and there have been a couple of reasons for this:

I was originally considering taking a sabbatical from the jewellery business this year, but ultimately, decided against it. Instead, we kind of set it on auto-pilot.

Sales have still been good (a solid few thousand dollars a month) but I can, by now, see the results of this approach (i.e. a slow decline in sales), and am ready to step things up again!

I’ve put together a plan for the new year – incorporating monthly marketing tasks, regular releases of new designs, and an increase in social media and blogging.

I’m most excited about a new range of wedding rings we’re releasing in January. For those outside of Australia, you may not know, but same-sex marriage has just been (finally!) passed into law here, so we’re going to celebrate that with our new release, and we’re planning on donating a percentage of sales of this line for a period of time to a LGBTQI youth charity.

Create & Thrive and the Thriver Circle

The biggest change during 2017 was that I moved away from doing monthly video workshops, into running monthly projects for my membership community, the The Thriver Circle. This has been super-fun, and it’s been a great way for the members to work alongside each other to move their businesses forward. However, I started to feel like I wanted to get back to offering more fresh content to members each month, while only doing a few video workshops a year.

There are a few big changes happening in 2018:

I also did a re-design on the Thriver Circle website this year, which I’ve been tweaking consistently – and will probably continue to do so until I’m completely happy with it. The Circle has been running for 3 years now, and I felt it was time for a re-fresh of the look and feel of the site.

My aim is to also update the Create & Thrive site to bring the design up to ‘the now’, since it hasn’t changed since I launched in 2013, and I feel like it’s a bit dated. My goal is to have this complete by April 2018.

I don’t currently have any plans to launch new courses in 2018… but this may change, as I’m currently going through a period of growth and ideas, so I’m open to what might arise out of this.

2018 is also the last time I plan on running the Wholesale Know-How course ‘live’. After this, I’m aiming to convert it into a self-study course.

I’m looking to work directly with more makers via my Shop Scrutiny services. (P.S. If you’re a Thriver Circle member, hold off on purchasing one of these until February… you guys are going to get a special deal!). I really love helping people improve their shops and websites, so I want to be a bit more vocal about the fact I offer this service, as I very rarely talk about it!

Finally – I will be running Set Up Shop twice in 2018 – probably March and October, though I haven’t yet set concrete dates.

And that, thrivers, is that!

I’ve been teaching this stuff here on C&T since 2013 – and for even longer on my old blog. I’m in the absolutely wonderful position now of seeing a number of makers who found me at the beginning of their businesses journey’s making a full-time living from their craft.

I’m really excited about what 2018 will bring, and about helping even more people to realise their dream of growing a thriving, profitable handmade business.

Here’s to a wonderful new year!

P.S. If you’re reading this before January 8th, and you’d like my help to set yourself up for the best year your biz has ever had, don’t miss the Handmade Biz Bootcamp. It’s a 21-day program that will help you find your focus for the year, gain clarity about the purpose of your biz, and create a rock-solid plan for your business. If you sign up now, you can get the whole bootcamp for just $15!