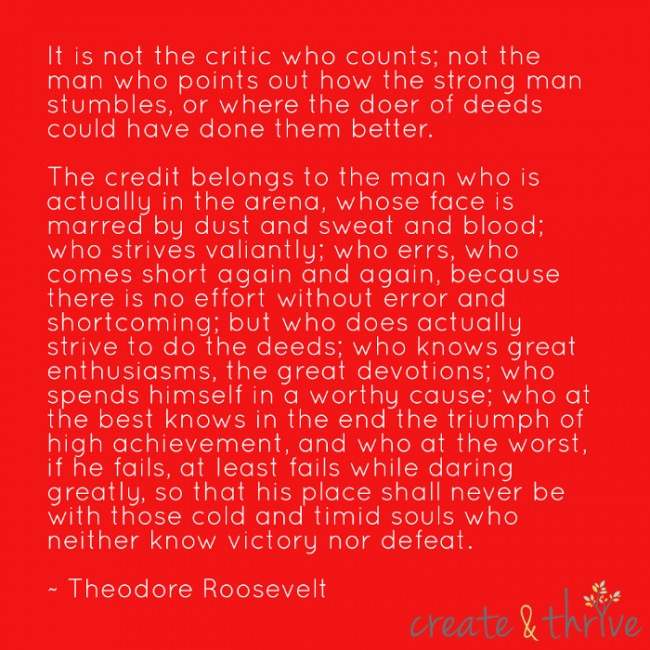 “It is not the critic who counts; not the man who points out how the strong man stumbles, or where the doer of deeds could have done them better.

The credit belongs to the man who is actually in the arena, whose face is marred by dust and sweat and blood; who strives valiantly; who errs, who comes short again and again, because there is no effort without error and shortcoming; but who does actually strive to do the deeds; who knows great enthusiasms, the great devotions; who spends himself in a worthy cause; who at the best knows in the end the triumph of high achievement, and who at the worst, if he fails, at least fails while daring greatly, so that his place shall never be with those cold and timid souls who neither know victory nor defeat. “

I read this quote last week (well, part of it) in this lovely short interview with Bene Brown. If you’ve never seen her wonderful TED talk, I’ve embedded it below for you.

Are you in the arena?

If you’re reading this, I’m hazarding a guess that you are.

Whether you succeed or fail is – in the long run – almost irrelevant. Because if you fail at this, I have no doubt that you will succeed in something else.

Because it is only those who are in the arena – striving, overcoming pain and obstacles, failing – who every achieve anything of note in this world.

I have no doubt that you – while striving to achieve your dream – have encountered the critic and the naysayer that Roosevelt speaks of.

They are not who you should be listening to.

Listen to the advice of someone who has done what you want to do – yes.

But do NOT listen to the criticism of those who are jealous, envious, or simply completely lacking in understanding about what it is that you want to achieve.

Take your eyes off those critics in the stands, and bring your focus back to whatever it is you’re battling in the arena.

That is where your focus needs to be – for that is the only place where you will make progress towards your dreams.

Here’s Bene Brown speaking on the power of vulnerability:

View all MotiBrights here (This site/resource is no longer available).